Completing our series of pen portraits of our 2020/2021 finalists, this week we introduce you to: 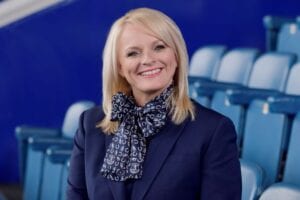 In 2010, after 16 years in the education and third sector, Denise was appointed CEO of Everton in the Community and spearheaded the transformation of the Club’s official charity into an internationally acclaimed organisation.

Under her leadership, Everton in the Community was awarded A ‘Big Society Award’  She was also the visionary behind Everton becoming the first Premier League football club to receive government approval to open a Free School – the Everton Free School and Sixth Form College.

Denise’s success with the charity resulted in her taking on a greater role within Everton FC. In 2011 she was appointed Chief Operating Officer, before being promoted to Deputy Chief Executive Officer in 2012.

In 2016 Denise was appointed to Everton’s Board of Directors and, in June 2018, became the Club’s Chief Executive Officer. Denise also serves as Chair of the Board of Trustees for Everton in the Community.

Denise’s work for the Club and charity has earned her the status as one of the Premier League’s most respected figures. In 2015 she received an ‘Outstanding Achievement’ award at the Stadium Business Awards.

At the 2017 Football Is More Conference in Switzerland – staged to shine a light on ‘outstanding social achievements of clubs, role models and charities’ – she was presented with the Lifetime Role Model award in recognition of her ‘excellent life-long commitment to a social cause’.

This remarkable young woman will be sharing her experiences and ambitions with the us on 14th May 2021 at the Inspiring Women Awards lunch.

To book your ‘front row seat’ at this event and be present whilst these inspiring women share their stories, visit book online.