Over March & April 2021 we will be publishing pen portraits of the Finalists attending the Inspiring Women Awards Lunch on 14th May 2021. 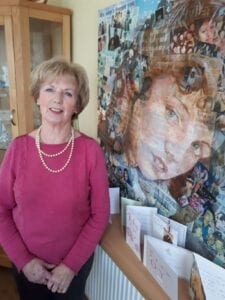 It’s been 33 years since Marie McCourt’s life was changed forever.

In February 1988 her 22-year-old daughter, Helen, disappeared on her way home from work.   Her killer was convicted by a jury on overwhelming DNA evidence but never admitted his guilt or revealed the location Helen’s remains.   He was released from prison last year.

Marie has searched, in vain, for her daughter’s body for more than 3 decades.  The family have never been able to have a grave at which they can lay flowers and pay their respects.  As a result, Marie and supporters have campaigned tirelessly to prevent other families from facing the same horrifying fate.

It took 5 years of campaigning to get ‘Helen’s Law’ written into the statute books.  The law, the Prisoners (Disclosure of Information About Victims) Bill, can deny parole to killers who refuse to reveal where they hid their victim’s body.  But even if they refuse to disclose information they could still be released if no longer deemed a risk to the public.  Helen’s Law came into force on January 4 2021, too late to stop the release of the person convicted of Helen’s murder.

A book about Marie and the campaign called ‘Justice for Helen’ co-written by freelance journalist Fiona Duffy was published in February 2021 – just days before the 33rd anniversary of Helen’s disappearance.

This remarkable woman will be sharing her thoughts and experiences with the us on 14th May 2021 at the Inspiring Women Awards lunch.

To book your ‘front row seat’ at this event and be present whilst these inspiring women share their stories, visit book online.