“I am truly honoured to have won this award and share the event with so many inspiring women. It really means a lot to me and the community I represent to receive this. Thank you to Jacqueline and all the team for providing us a platform to share our story and celebrate the amazing women in the North West.”

The Award, which is open to 16-25-year-olds, hopes to inspire the next generation by recognising those young women who have beaten the odds to achieve their dream; been inspirational to others; set up businesses or are overcoming obstacles to pursue their career. Initially, The Foundation funds an annual bursary of £1,000 for the Inspiring Young Woman award winner.

The aim is to now allocate funds to a wider audience in this age group. From 2018, The Inspiring Women Association in conjunction with the Foundation will be supporting and funding projects benefiting young women in the area. One such beneficiary is the ‘Pretty Tough’ girls project at Warrington Youth Zone. 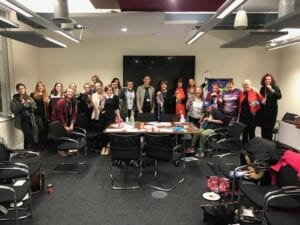 “The generous funding secured through the Inspiring Women Foundation enabled us to deliver our programmes for vulnerable girls and young women between April and December 2020.

The core aspect of the ‘Girls Group’ programme consisted of a group of young women between the ages of 14-19 attending weekly support sessions. The sessions focused on confidence-building, self-esteem, and emotional wellbeing. Session topics were introduced by the staff but were often further shaped by the needs of the young women within the group who would be involved in designing future sessions and keeping the themes and focus relevant to their own lives. The groups explored topics such as body dysmorphia, eating disorders, harmful relationships, sexual health, period poverty, anger-management, and future career aspirations.”

Shaneice Roberts, Steff Needham and Cat Jones from Us Unltd, Flint 2011 Inspiring Young Woman Winners This year’s recipients are three girls who have turned their own experiences of homelessness into a business, helping those [...]

Fajer Rabia 2010 Inspiring Young Woman Winner At 25 Fajer has accomplished a staggering amount in the last seven years and doesn't plan on stopping any time soon! She arrived in Manchester aged 18, [...]

“Since the awards, I have been in and out of the hospital and Intensive Care many times. However I am still blogging, still reaching out and still helping to a positive impact in other people’s lives. Things a have been really tough for me but it’s things like the aware that help me push through and keep going. The grant money was spent on stripping out the spare room and making it my new Tasha friendly room! Everything in it is hypoallergenic, with wood floors and sterile areas for medication. It’s purple with inspiring quotes all over the walls and it is the perfect place for me to rest and relax safely. Plus my old bedroom is now my lounge with an Xbox and a sofa bed so I can spend time with my friends in a safe environment.”