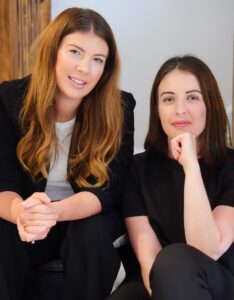 “We are changing the narrative when it comes to females and personal finance, and we will be the brand females think of when they make a financial decision.”

Fed up with dipping into her overdraft every month, lawyer Laura Pomfret decided to do something about it. Teaming up with her sister, Holly Holland, they initially used Instagram to create an online community who felt as they did – overwhelmed by the amount of financial content and failing to manage their finances. Three years later that online community has become the basis of their business, the Financielle App.

This female financial wellness platform is helping to educate and empower women and create a global community. Since launching in October 2021, 3,500, users have downloaded the app with over 16% upgrading to the premium offering (market avg. is 3-5%). They have partnered with some of the biggest fintech brands such as Pension Bee and Wealthify which are female founded.

Financielle focuses on the individual and the bigger picture when it comes to money with content tackling everything from the gender pay gap and the financial impact of maternity leave to setting investment goals and sticking to a budget. The trick, the sisters believe, is to strip out the jargon and give alternative views to planning and financial products.

As a result, they have built a 37,000 strong global community and launched ‘The Financielle Playbook’ to help people in financial crisis.  They’ve helped some achieve life changing results; from paying off business debts of £27,000 by one female business owner to solo females buying their first homes and couples being able to save up and pay for IVF (the round was successful and the first Financielle baby (Baby Isaac) is thriving!)

The sisters are aiming high and want their app to be used by over one million people in the next twelve months.