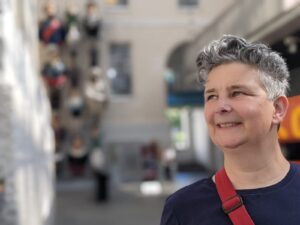 Sally Carr grew up with many labels – and not the designer kind.

Sally story is one of triumph over adversity.  A traditional up-bringing meant deciding to out herself as a lesbian in the 1980s was going to be traumatic, but it was also an experience which made her determined to ensure the lives of young LGBT+ people would be better.

Despite leaving school with no qualifications, she forged a career in youth work and now has two Masters to her name.

Sally’s achievements in driving change by supporting our young people and our often excluded communities have shaped her last 20 years.

From setting up what is now The Proud Trust (England’s largest LGBT+ youth organisation) in 2005.to joining the Board of the National Youth Agency in 2019.

Sally’s achievements also include being nominated Trustee of Youth Focus North West in 2021, established the Ireland, UK and Islands of Britain LGBT+ Youth Worker Network in 2018 to strengthen the LGBT+ youth work sector and to share learnings and best practice (a network of 150+ youth workers.

In 2015 established Sapphormation, a Manchester-based festival for women who love women and in 2012 she was awarded an MBE for contribution to LGBT+ youth.

Sally is currently creating a model and practice of Therapeutic Youth Work that will enable youth workers to work with young people in a way that takes them beyond a trauma-informed approach.

Now a role model for the Traveller Movement, She is working with the main Gypsy Romany and Traveller (GRT) organisations in England and Wales to provide a strategic pathway to ensuring increased visibility, access, and inclusion of GRT LGBT+ people across communities.